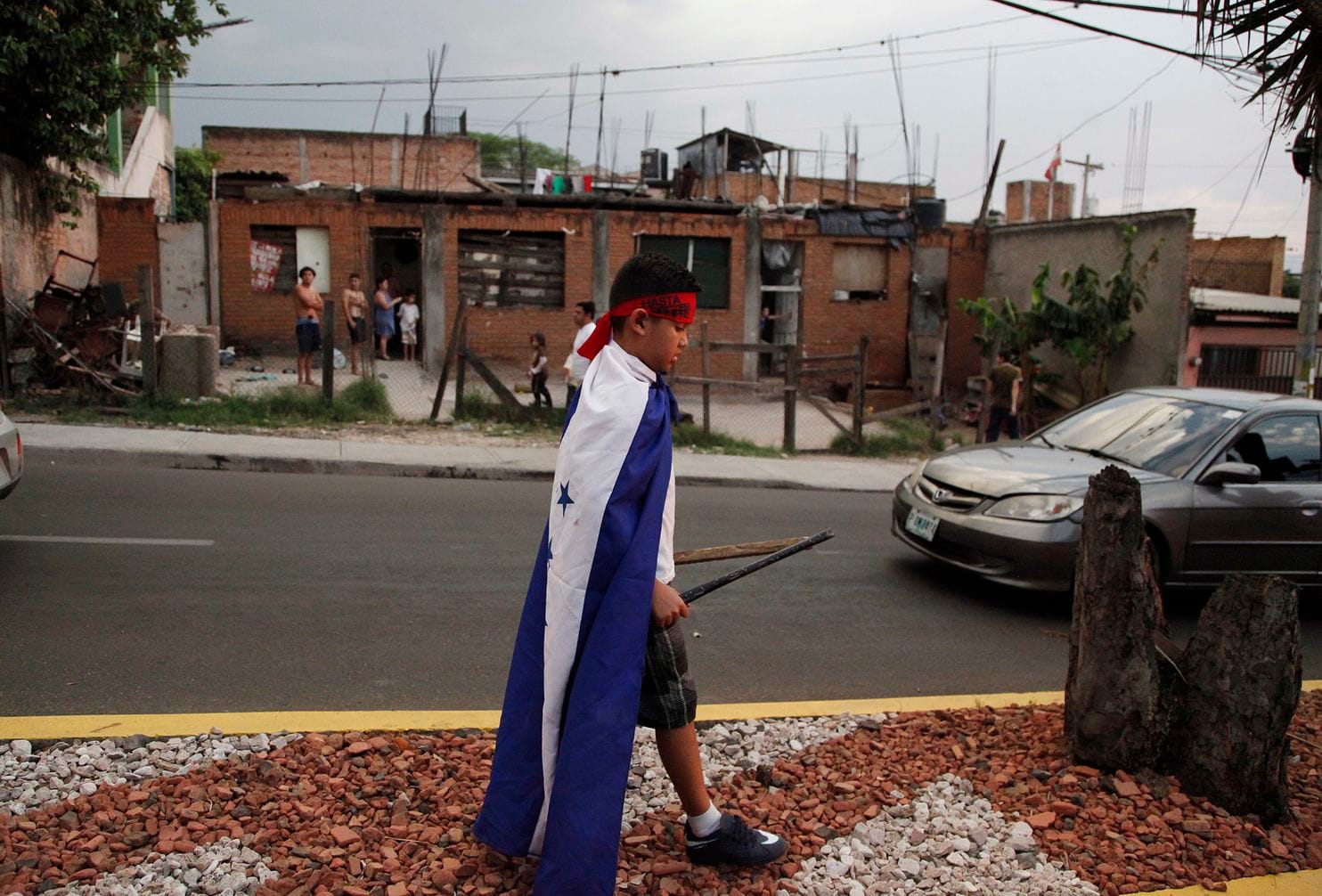 Honduran immigrants are in danger and it’s partly our fault

Put yourself in the shoes of a Honduran Immigrant who has been here for 20 years. Would you voluntarily return to the still-troubled country you left two decades ago when you have been striving to live the American Dream? This isn’t who we are. We are a nation of immigrants, and it’s in our interest that we keep that dream alive for future generations.

A boy in Tegucigalpa, Honduras, protests the decision by the Trump administration to end temporary protected status. IMAGE: WASHINGTON POST

Honduran immigrants are in danger and it’s partly our fault

The mainstream narrative often sites the causes of migration to factors from a migrants’ home country. In reality, migration is often a manifestation of a profoundly unequal and exploitative relationship between migrant-sending countries and countries of destination. Understanding this is vital to making immigration policy more effective and ethical. One example involves the history of relations between Honduras and the United States.

Thanks to President Trump’s Twitter-trashing of Honduran asylum seekers in a caravan comprised of a few hundred desperate migrants, mainly women and young people, odds are that a good portion of Americans are at least aware of the hardship from which Hondurans immigrants have fled.

Less known, however, is that the Department of Homeland Security recently terminated the Temporary Protected Status (TPS) of 57,000 Hondurans living in the United States. Now these immigrants — all of whom have been in the United States since at least 1999, many much longer — must return to Honduras by Jan. 5, 2020.

These immigrants were legally permitted to stay in the United States under a status that four successive Republican and Democrat administrations chose to maintain over 14 periodic reviews, based on the conditions of underdevelopment, poverty and crime that still exist in Honduras.

By definition, these Hondurans are not criminals; felons are not eligible for TPS. Those with the status who commit serious crimes lose their status and are placed in deportation proceedings — as any criminal migrant should be.

The Center for Migration Studies reports that 85 percent of the Honduran TPS beneficiaries work legally; much higher than the national average. They did come here to work, so those numbers are not surprising. The Honduran immigrants are mainly construction workers, truck drivers, gardeners and child-care workers, working hard to make an average salary of $24,000 a year. The Center for American Progress and the Immigrant Legal Resource Center estimate that losing these working Hondurans would result in a productivity loss of $11 billion in gross domestic product over the next decade. And their lost Social Security contributions would be more than $1.3 billion over 10 years. Yet even if one ignores these economic contributions to our nation, think of this fact: There is an estimated 53,000 American citizen children who now face losing their law-abiding parents to deportation.

How did the United States play a part in causing Honduran immigrants to seek asylum?

U.S. military presence in Honduras and the roots of Honduran migration to the United States are correlated so let’s talk history. It began in the late 1890s, when United States-based banana companies first became active in Honduras. At that time American companies built railroads, established their own banking systems, and bribed Honduran government officials in order to build their power in that region. As a result, the Caribbean coast became an American controlled enclave that systematically swung the whole of Honduras into a one-crop economy, whose wealth was then carried off to New Orleans, New York, and Boston.

By 1914, United States banana-interests owned about 1 million acres of the best land in Honduras. These holdings grew through the 1920s to such an extent that Honduran peasants had no possibility of accessing their nation’s productive soil. Over several decades, U.S. capital also came to dominate the country’s banking and mining sectors, a process facilitated by the weak state of Honduras’ domestic business sector. This was coupled with direct U.S. political and military interventions to protect U.S. interests in 1907 and 1911. Such developments made Honduras’ ruling class dependent on the United States government for support. A central component of this ruling class was and continues to be the Honduran military. By the mid-1960s it had become, in one historian’s words, “the country’s “most developed political institution,” – one that Washington played a key role in shaping.

This was especially the case during the presidency of Ronald Reagan in the 1980s. The Reagan administration’s policies in Honduras were not focused on goals for Honduras itself, but on interests and objectives the United States had in Nicaragua and El Salvador. Essentially, Honduras was doing Reagan’s dirty work in Central America.

As part of its effort to overthrow the Sandinista government in neighboring Nicaragua and quash the region’s leftist movements, the Reagan administration stationed several hundred U.S. soldiers in Honduras. Moreover, it trained and sustained Nicaragua’s “contra” rebels on Honduran soil, while vastly increasing military aid and arm sales to the country. The Reagan years also saw the construction of numerous joint Honduran-U.S. military bases and installations. Such moves greatly strengthened the militarization of Honduran society. In turn, there was a dramatic increase in the number of political assassinations, “disappearances” and illegal detentions.

The Reagan administration also played a big role in restructuring the Honduran economy. It did so by strongly pushing for internal economic reforms, with a focus on exporting manufactured goods. It also helped deregulate and destabilize the global coffee trade, upon which Honduras heavily depended. These changes made Honduras more amenable to the interests of global capital. They disrupted traditional forms of agriculture and undermined an already weak social safety net.

In 1981 Honduras returned to a parliamentary democracy, but by then the process of militarization had been so heavily funded by the U.S and had made such a significant impact on public policy that little changed for the better. The 1980s, then, were characterized by a major increase in human rights violations, as armed forces, having been ousted by civilian government, remained very much in control. Over the first half of the 1980s, military aid from the U.S—alongside violence and warfare across borders—increased dramatically. Under the authority of General Gustavo Alvarez Martinez and his infamous death squad Battalion 3-16, Honduras broke its tradition of international neutrality by illegally arresting Salvadoran refugees and their supporters. Over the next few years victims were targets for murder, torture, and disappearances. Battalion 3-16, backed by the CIA, operated secret detention centers where victims were interrogated, often beaten to death, and then buried in secret burial grounds. While the U.S. is not suspected of playing an active role in these atrocities, our country was still a major actor in that it not only funded the Honduran military, but also withheld reports and ignored evidence of human rights violations.

It was not until 1994 that a Honduran president was elected who, on behalf of civilians and in response to outside pressure, began to demand accountability for the violations of the 1980s. The army protested this by deploying tanks to the streets, sending death threats to government officials and human rights activists, and through on-air propaganda aiming to justify past violations. The United States should be obligated to engage in commissions for reconciliation because of its significant role in Honduras’ military history, human rights violations, and related political and social instability in Honduras.

The U.S., however, has either denied or justified the violations. At the same time, civilian governance remains weak as officers of the Honduran armed forces continue to hold high government positions. There have been small but encouraging steps toward greater respect for human rights in Honduras, including democratic governance, separation of military and police forces, and minor policy reforms. Yet, it seems that political frustration and human rights violations will persist, at least until relevant actors can make efforts to repair the effects of this unfortunate past.

A liberal reformist elected in 2006

These decades of U.S. involvement in Honduras set the stage for Honduran emigration to the United States, which began to markedly increase in the 1990s. Still, liberalizing tendencies of successive governments and grassroots pressure provided openings for democratic forces. They contributed, for example, to the election of Manuel Zelaya, a liberal reformist, as president in 2006. Almost all of the Latin American governments — which are mostly left of center — also sympathize with Zelaya because he is a reform president fighting against a corrupt oligarchy. In one of the poorest countries in the hemisphere, he raised the minimum wage by 60% and increased teachers’ salaries and public pensions, as well as access to education. However, these efforts infuriated the country’s oligarchy, leading to his overthrow by the military in June 2009.

The 2009 coup, more than any other development, explains the increase in Honduran migration across the southern U.S. border in the last few years. Although the Obama administration officially decried Zelaya’s ouster, it equivocated on whether or not it constituted a coup, which would have required the U.S. to stop sending most aid to the country.

Secretary of State Hillary Clinton, in particular, sent conflicting messages, and worked to ensure that Zelaya did not return to power. This was contrary to the wishes of the Organization of American States, the leading hemispheric political forum composed of the 35 member-countries of the Americas, including the Caribbean. Several months after the coup, Clinton supported a highly questionable election aimed at legitimating the post-coup government.

Since the coup, writes historian Dana Frank, “a series of corrupt administrations has unleashed open criminal control of Honduras, from top to bottom of the government.” Organized crime, drug traffickers and the country’s police heavily overlap. There have been thousands of illegal arrests, beatings and torture by police and military, the closing down of independent radio and TV stations, and some killings of peaceful demonstrators and opposition activists. These have been denounced and documented by Human Rights Watch, Amnesty International, the OAS Inter-American Commission on Human Rights (IACHR), as well as Honduran, European, and other human rights organizations.

Although its once sky-high murder rate has declined, the continuing exodus of many youth demonstrates that violent gangs still plague urban neighborhoods.

Through brave work by the Honduran attorney general, civil society and the international community, particularly the United States, Honduras is attempting to reduce corruption and impunity. And the economy is growing, though not nearly fast enough to provide work to those living in Honduras (never mind to those losing TPS status who will be forced to return).

Put yourself in their shoes. Would you voluntarily return to the still-troubled country you left two decades ago when you have been striving to live the American Dream? This isn’t who we are. We are a nation of immigrants, and it’s in our interest that we keep that dream alive for future generations.

The page you requested could not be found. Try refining your search, or use the navigation above to locate the post.